In her San Diego opener under less-than-ideal conditions, top seed Iga Swiatek showed why she is the best in the world. The Pole’s quarterfinal opponent will be sixth-seeded American Coco Gauff.

Iga Swiatek continues her incredible season with a 6-4 4-6 6-1 victory over Zheng Qinwen in a frustrating match interrupted by a light drizzle on several occasions. The world No.1 stepped on court at the scheduled time, but after playing just one point, play was suspended for rain. Still recovering from a cold she had last week in Ostrava, Swiatek repeatedly had to reach for tissues stashed next to her towels so she could blow her nose.

After long battles through many deuce points that defined the first two sets, it was as though Swiatek decided she was done with the cold wet weather and wanted to go home for some hot tea, winning five straight sets.

Looking at the upside after a long battle, Swiatek is happy she had a chance to adjust to the conditions in what was her first match at the tournament: “it’s tricky when you have just three days to get used to [the balls and conditions] and I like the fact that this match was a little bit longer. I felt the rhythm a little bit better at the end.” The 21-year-old will need to be at her best to beat Coco Gauff when they meet in the quarterfinals Friday.

The 18-year-old Gauff has gotten comfortable on the San Diego hardcourts, playing singles and doubles in day and night conditions. Gauff beat Bianca Andreescu 6-4 4-6 6-3 to reach the quarterfinal. This was her first time playing the Canadian, and the teenager explained, “it’s hard to formulate your own game plan when you never played someone. You can kind of see how her ball moves, but until you like feel it you don’t know.”

Swiatek is a familiar opponent for Gauff. They have played three times, twice on clay, and Swiatek won all of those matches. The American said, “my coach is gonna come up with the scouting report but I think it’ll be more or less the same. With her, it’s all about executing it and it’ll be tough. I’m just gonna go out there and enjoy the moment.” 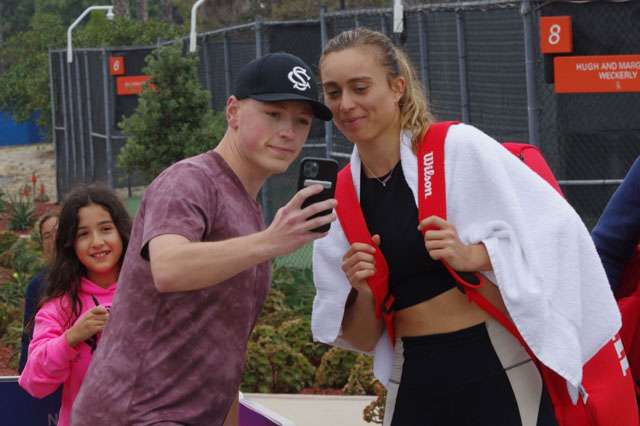 Second seed Paula Badosa enjoyed moments of her 6-0 6-3 victory over American qualifier Louisa Chirico. Asked if she had any fun on the court, the Spaniard laughed and said “in the first set.” On the cold humid nights, the balls and courts have gotten quite slow, suiting her preferences.

The 24-year-old Badosa is scheduled for another night match Friday, playing American Danielle Collins. Looking ahead to the match, their first encounter, Badosa said, “I expect fire there. I will have to be very active, very explosive, because if not, I will be one hour in the shower.”

The first quarterfinal Friday morning will be played between Donna Vekic and Aryna Sabalenka. Vekic, who came into the tournament through qualifying, leads the head-to-head 4:1, but Sabalenka is undeterred. The Belarusian told media, “we had a lot of tough matches against each other so I’m preparing for a great fight and, as always, I’ll do my best and fight for every point.” 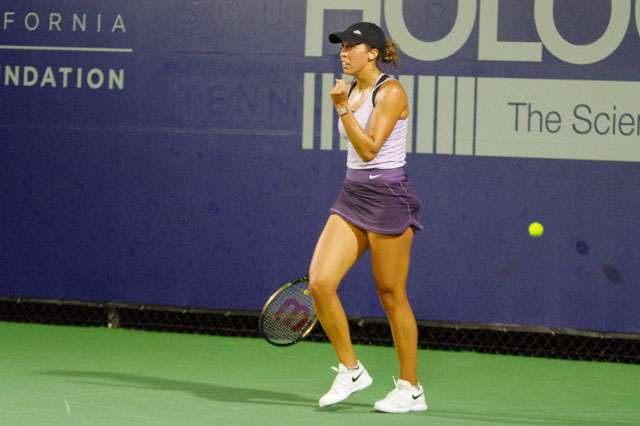 Two Americans, Madison Keys and Jessica Pegula, will face each other for the first time in their professional careers. Keys beat Daria Kasatkina 6-4 6-3 to reach this stage, after being down 0-4 in the first set. She recovered winning seven straight games and frustrating Kasatkina.

With unpredictable weather this week, the court speeds have been variable and any players fortunes can turn in an instant when the sun comes out or the low clouds envelop the court.