Home Tennis Training Sakkari advances out of the Nancy Richey Group, others can still qualify for the semifinals

In Wednesday’s WTA Finals action, Maria Sakkari became the first this year’s semifinalist by advancing out of the Nancy Richey Group, while the other three players in her group are still in the mix for a semifinal spot. 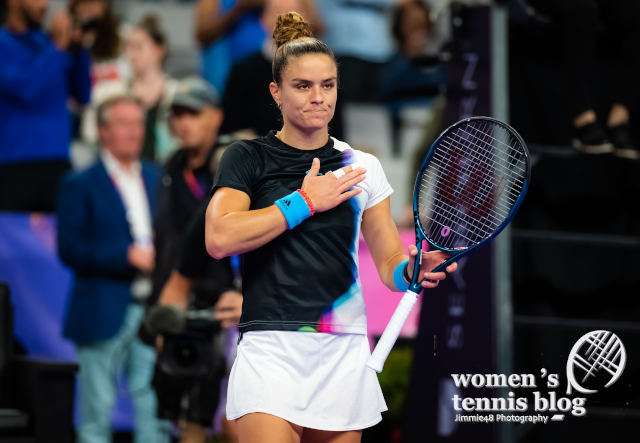 After losing to Aryna Sabalenka on Monday, Jabeur rallied for a 1-6 6-3 6-3 victory over American Jessica Pegula to keep alive the hopes of advancing to the semifinals on her season-ending tournament debut. The two-time Grand Slam finalist Jabeur lost seven consecutive games early in the encounter with Pegula, but took the last three games in each of the second and third sets and became the first Tunisian to win a WTA Finals match.

Pegula has now lost nine matches in a row to Top 5 players. However, the American is not eliminated from the Nancy Richey Group. Her next opponent will be Aryna Sabalenka.

Maria Sakkari is the first and so far the only player to progress out of the round-robin stage, as her Wednesday’s 6-2 6-4 victory over Sabalenka in the Nancy Richey Group booked her a spot in the Fort Worth semifinals. On Monday, Sakkari defeated Pegula in straight sets, so she’s 4-0 in sets in her group.

Jabeur, Sabalenka, and Pegula all still have a chance to take the one remaining semifinal spot in their group. Their matches on Friday will decide.

By: Marija
Title: Sakkari advances out of the Nancy Richey Group, others can still qualify for the semifinals
Sourced From: womenstennisblog.com/2022/11/03/sakkari-advances-out-of-the-nancy-richey-group-others-can-still-qualify-for-the-semifinals/
Published Date: Thu, 03 Nov 2022 07:38:32 +0000

Did you miss our previous article…
https://tennis-tennis.com/5-awesome-singles-strategies-to-help-you-win-tennis-tactics-explained/