A pair of #NextGenATP youngsters were among six ATP Challenger Tour champions last week. American Zachary Svajda rallied from a set down in the Tiburon Challenger final to collect his maiden Challenger title while Kazakhstan’s Timofey Skatov triumphed at the Parma Challenger presented by Iren.

“In the first set, Ben played lights out,” Svajda said. “I was nervous, I was getting tight, double faulting quite a bit. I knew in the second set I was going to have to change something up, try spinning my serve in so I don’t have to hit second serves and also try to put more pace on the ball. That was the momentum switch.”

The title came to Svajda’s surprise. In just his seventh Challenger tournament of the year, the youngster needed a deciding set tie-break in his first two matches to stay alive.

In 2019, Svajda made his Tour-level debut at the US Open, where he squandered a two-set lead to Italian Paolo Lorenzi in the first round. The-then 16-year-old became the youngest male player to compete at the US Open since Donald Young in 2005. In 2021, Svajda earned his first Tour-level win at Flushing Meadows (d. Cecchinato), before falling short to Jannik Sinner.

Shelton, who has finished runner-up at three of his past four Challenger tournaments, rises to a career-high 160 in the Pepperstone ATP Rankings.

At the Challenger 125 event in Parma, Italy, Skatov needed three hours, eight minutes to prevail against Slovakian Jozek Kovalik 7-5, 6-7(2), 6-4 and claim his maiden Challenger title. Skatov, who is 13th in the Pepperstone ATP Live Race To Milan, ended Kovalik’s nine-match winning streak and is the first Kazakh Challenger champion this season. 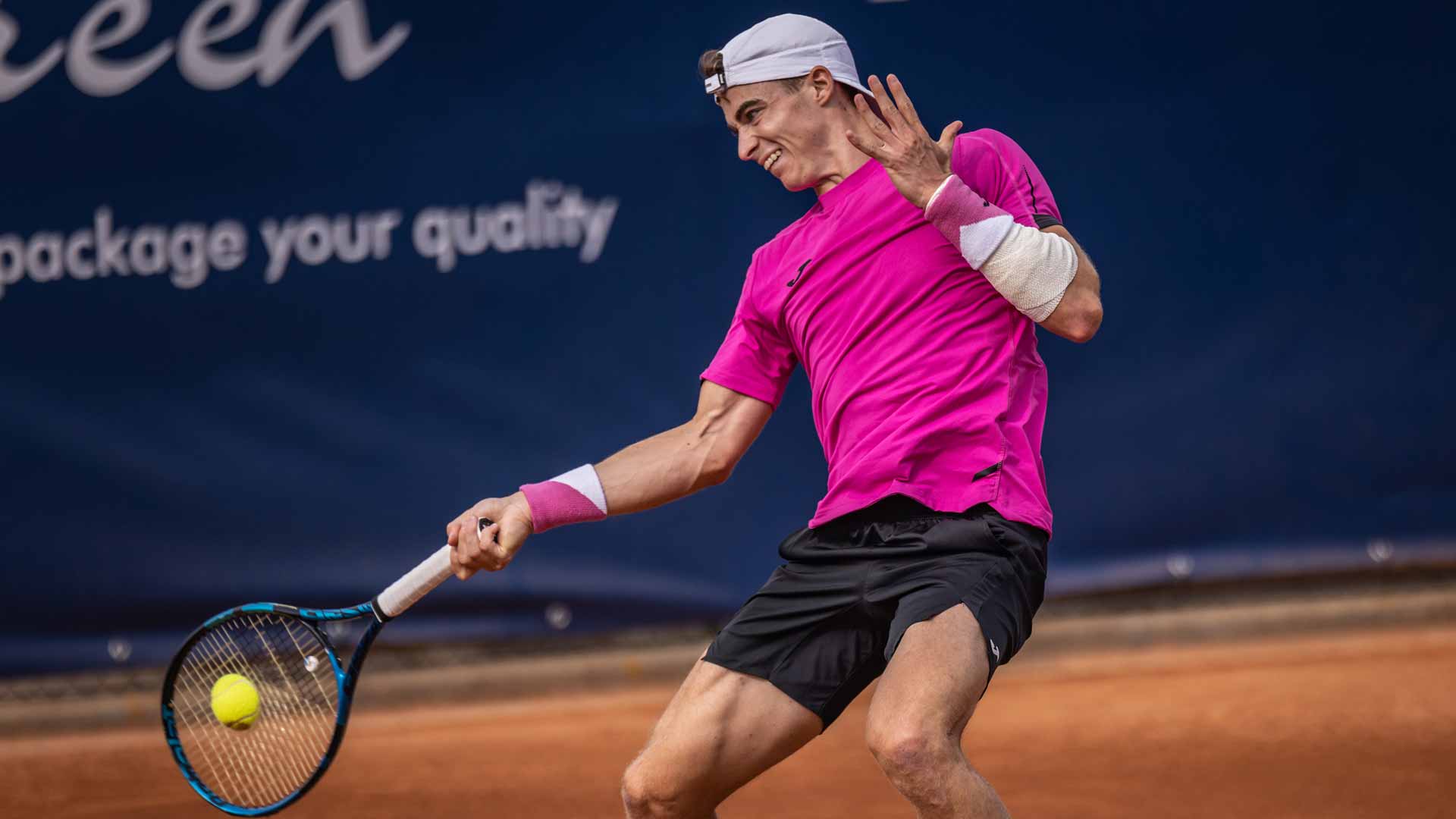 The 21-year-old has reached at least the semi-finals in four of his past five Challenger tournaments and the title in Italy propels Skatov to a career-high No. 152. He also surged to 13th in the Pepperstone ATP Live Race To Milan, keeping alive his outside hopes of qualifying for the Intesa Sanpaolo Next Gen ATP Finals.

“This week was really tough,” Skatov said. “All my matches were really long, but the best week of my life so far. This is just the beginning. I have to continue working as hard as possible.”

The ATP Challenger Tour returned to South Korea this week for the first time since May 2019. Hungarian Zsombor Piros captured the Gwangju Open Challenger title, ousting Ecuadorian Emilio Gomez in the final, 6-2, 6-4.

Piros, 22, won the Tampere Challenger in July to claim his first Challenger title. Boasting a 28-13 Challenger match record this season, Piros is the second-highest ranked Hungarian men’s player, behind Marton Fucsovics. The 2017 Australian Open boys’ singles champion rises to a career-high No. 138. 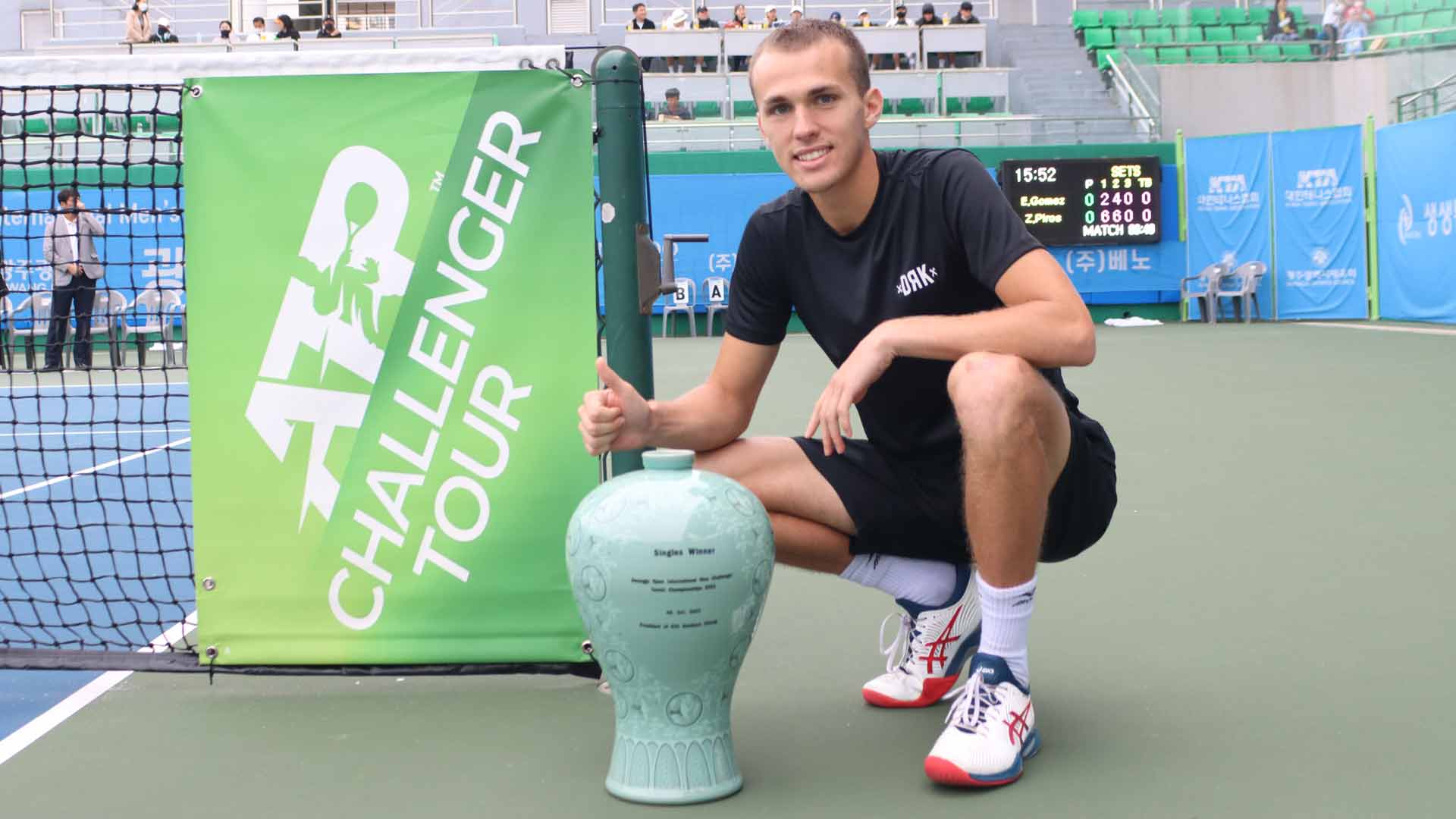 Zsombor Piros is crowned champion at the Gwangju Open Challenger.

Gomez, 30, is a six-time Challenger finalist this season and has won 17 of his past 20 Challenger-level matches, including winning the title in Winnipeg, Canada (d. Galarneau). Gomez, son of 1990 Roland Garros champion Andres Gomez, climbs to a career-high No. 98 in the Pepperstone ATP Rankings.

“Unbelievable week,” Sels said. “I’ve played a lot of matches this past month… I felt really confident before this tournament and I just went with the flow. There was no place for doubting today.” 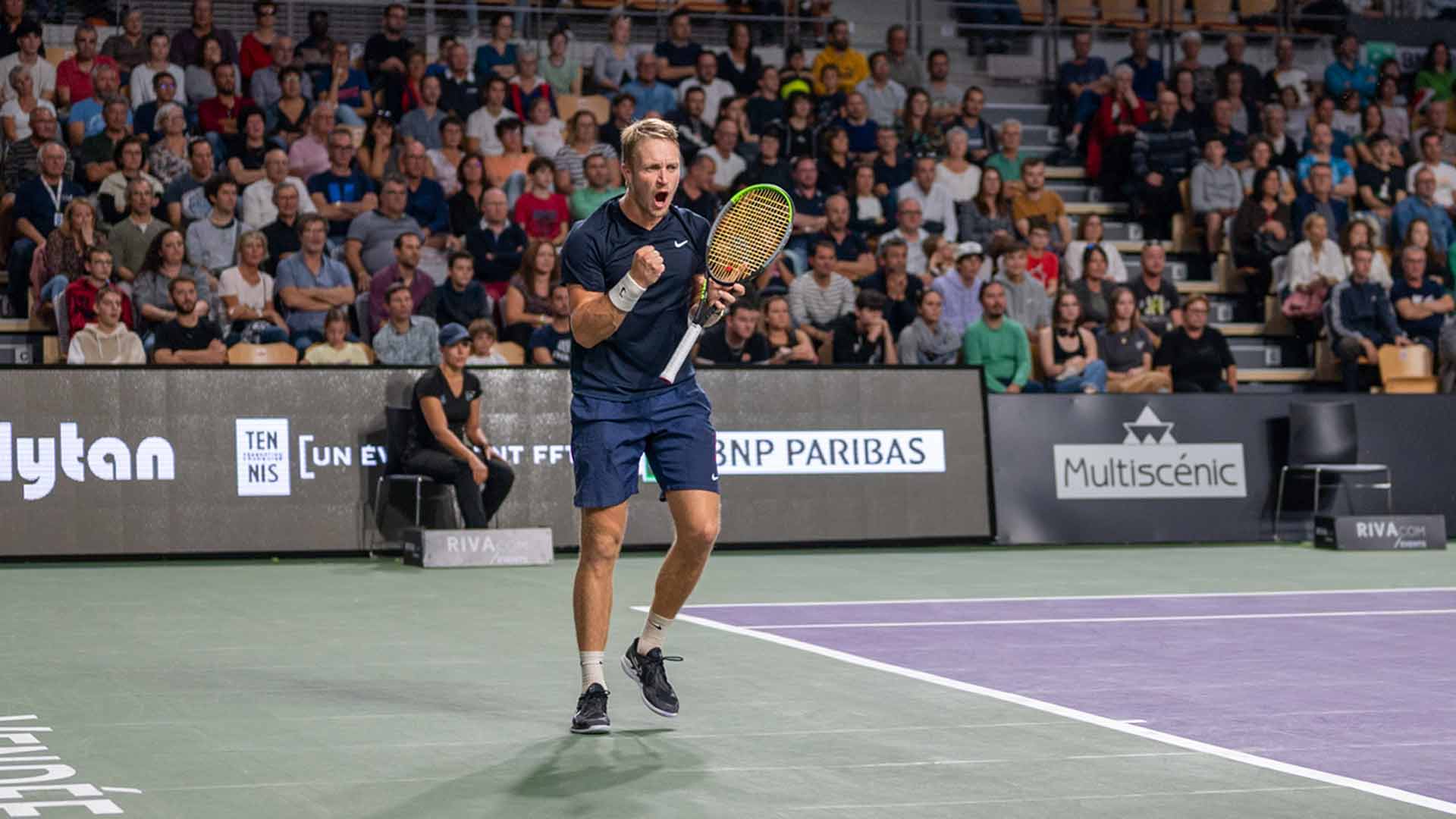 In September, the 27-year-old finished runner-up at the Tulln Challenger and reached the semi-finals in Braga, Portugal. The Dutchman has won 12 of his past 14 Challenger-level matches and the title in Mouilleron le Captif, France launches him to a career-high No. 141.

Slovakian Lukas Klein dropped just one set all week to be crowned champion at the Alicante Ferrero Challenger, which is held at the JC Ferrero Equelite Sport Academy in Villena, Spain. In the championship match, the 24-year-old defeated the Dominican Republic’s Nick Hardt 6-3, 6-4.

“From the first match, I was playing better and better,” Klein said. “I was a little nervous at the end, but somehow I made it. I’m happy.” 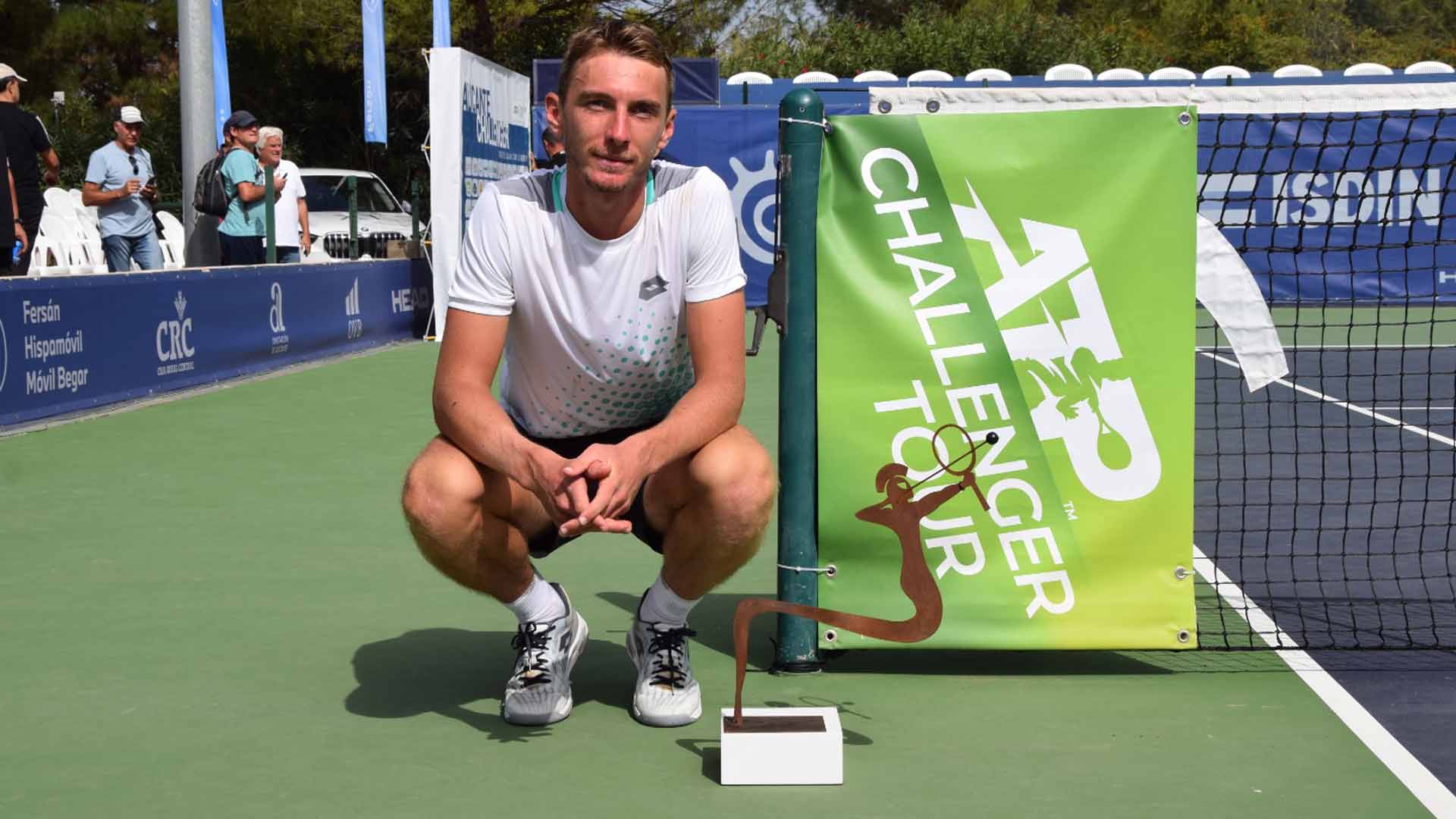 Lukas Klein wins his second Challenger of 2022 at the Alicante Challenger.

Klein, seeded eighth, claimed his maiden Challenger title earlier this season as a qualifier in Troisdorf, Germany (d. Bergs). In June, he advanced through qualifying to make his Grand Slam debut at Wimbledon, where he fell short to Liam Broady in five sets.

On the clay-courts of Campinas, Brazil, British qualifier Jan Choinski defeated second seed Juan Pablo Varillas 6-4, 6-4 to win the Campeonato Internacional de Tenis. The championship match was halted by rain Sunday and was eventually moved to an indoor-clay venue in Sao Paulo Monday afternoon. With Choinski leading 6-4, 4-4 15/15 when the match resumed indoors, the 26-year-old wasted no time to earn his maiden Challenger title. Choinski, World No. 348, is the first non-South American to win the Campinas Challenger since Gastao Elias in 2017. 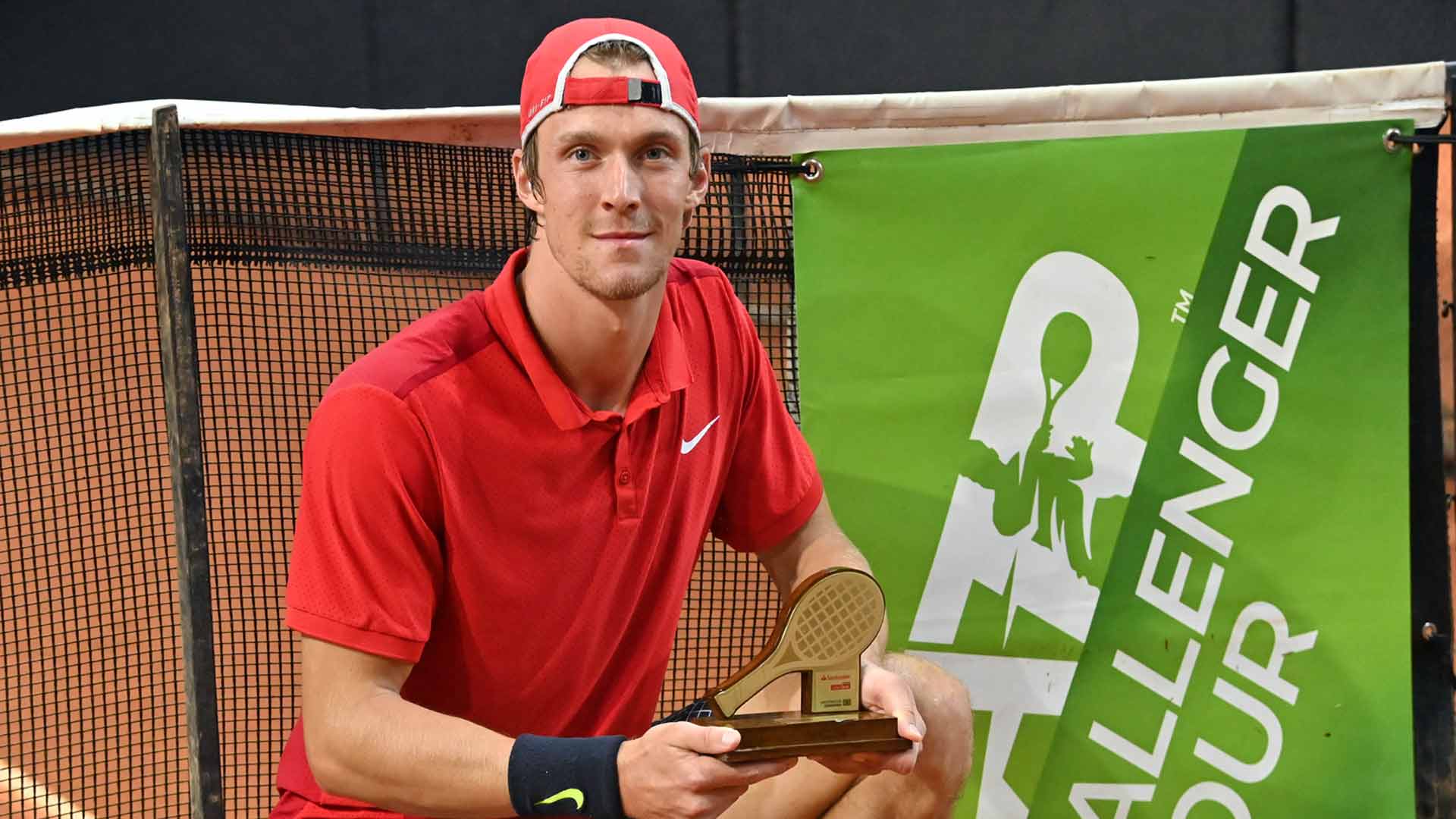