Home Tennis Training Kyrgios: I Don’t Give a F**k

On Monday night in Melbourne, Ash Barty was honored with the Newcombe Medal awarded annually to Australia's top tennis player.

Kyrgios partnered Thanasi Kokkinakis to win the Australian Open doubles title and battled through to his maiden major singles final at Wimbledon.

Commenting on a graphic comparing his 2022 stats to Barty's, Kyrgios did not hold back on being bypassed.

“LOL. No respect at all,” Kyrgios posted on social media. 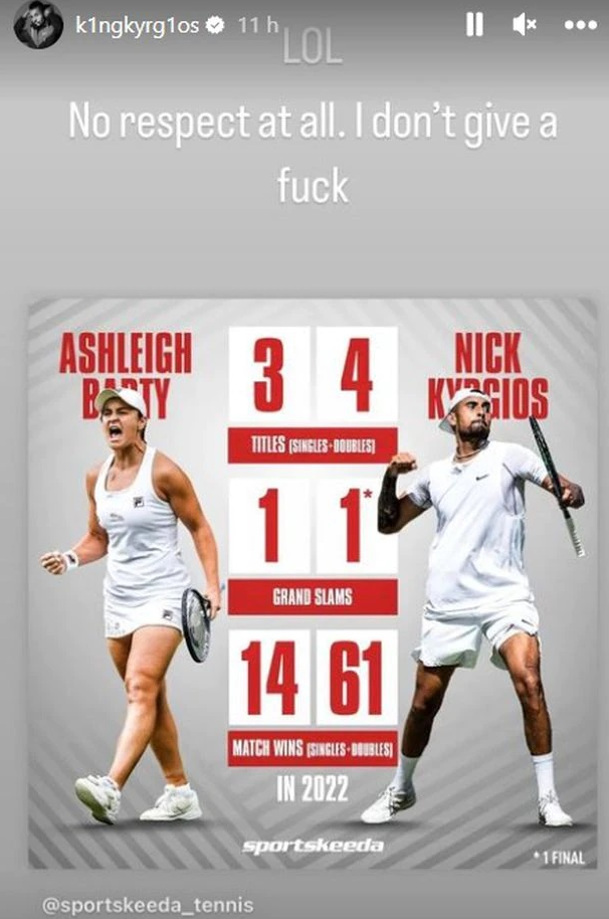 The comments came about a week after Kyrgios told the AAP if Australian fans embraced him more, then perhaps he'd play Davis Cup.

The Wimbledon finalist says he’s felt a lack of respect from Australian fans and officials and told the Australian Associated Press maybe if fans embraced him a bit more, he’d not only play the competition, he’d bring Davis Cup home.

“Maybe if Australia embraced me a little bit more, I would play it and bring home the trophy,” Kyrgios told AAP. “But who knows?”

Kyrgios said if Aussies want him to play so badly, then show some support and stop with the constant criticism.

“It’s not always easy for me to erase everything in Australia that’s said negatively about me or my family,” Kyrgios told AAP. “You don’t need that—so it’s interesting that they really want me to play, but are always criticizing.”

Kyrgios, who last played Davis Cup back in 2019, owns an 11-5 singles record in Davis Cup competition.

Did you miss our previous article…
https://tennis-tennis.com/how-djokovic-gets-so-much-smooth-power-tennis-technique-explained/