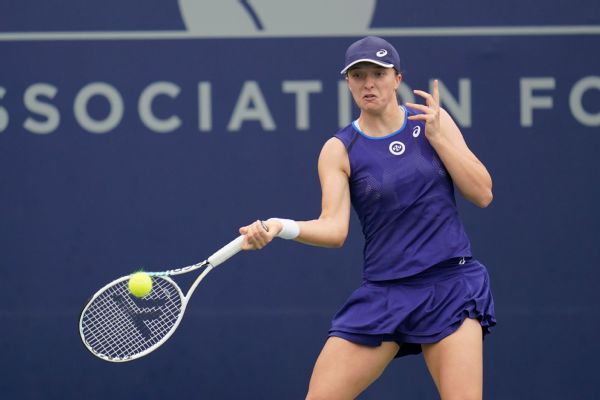 SAN DIEGO — Top-ranked Iga Swiatek needed more than two hours to post a 6-4, 4-6, 6-1 victory over Qinwen Zheng of China in her opening match Thursday at the WTA 500 San Diego Open.

Contending with a steady mist that caused a 30-minute delay just after the match’s initial point was played and a brief halt early in the second set, Swiatek shook off the hard-hitting Qinwen, ranked 28th, in the Round of 16.

Swiatek’s victory was the 61st on the WTA tour this year for the 21-year-old from Poland, who has held the world’s top ranking since April 4.

“I wasn’t expecting to have this kind of good experience so soon in my career,” said Swiatek, who has notched six titles in 2022, including the US Open, French Open and Indian Wells. “It’s like my dreams are coming true.”

Playing on a slick hardcourt surface, both players made frequent use of drop shots, which caused Swiatek to take a fall in the second set as she attempted to return a successful Qinwen drop shot.

The first and second sets were tied at 4-all. In the opening set, Swiatek broke Qinwen’s serve for a 5-4 lead before holding serve.

With the score tied 4-all in the second set, it was Qinwen who broke Swiatek for a 5-4 advantage. Qinwen fended off five break points before claiming the ninth game. Qinwen then broke Swiatek to tie the match at a set apiece.

As tightly contested as the opening sets were, Swiatek quickly grabbed a 5-1 led in the third. She captured the decisive final game, winning four straight points at love.

“This draw is so good that I wasn’t expecting any easy matches,” said Swiatek, who reached last Sunday’s finals of the Agel Open in Ostrava, Czech Republic, before losing to former No. 2 Barbora Krejcikova, who was competing in her native country.

Later Thursday, sixth-seeded Coco Gauff got past unseeded Bianca Andreescu of Canada 6-4, 4-6, 6-3, showing off her fiery shotmaking in the decisive third set.

“There were some turning points, but every game mattered, every point mattered,” Gauff said. “We both fought hard and the atmosphere was great.”

Early in the third set, Gauff faced a 3-1 deficit before taking charge and winning the next five games.

Gauff’s lunging down-the-line forehand just out of Andreescu’s reach sent her into Friday’s quarterfinal match against the top-seed Swiatek.

The match will be a reprise of this year’s French Open final, won in straight sets by Swiatek, who also defeated Gauff in the 2021 Italian Open.

“Iga is a champion, so we’ll see how things go this time,” said the 18-year-old Gauff, who has competed against Swiatek since both were highly-ranked juniors.