The first round of the WTA 500 in San Diego has concluded, with threats looming in every corner of the tight draw as the remainder of the quarterfinals are being set.

Finishing up where they left off after a rain suspension Tuesday, Coco Gauff defeated Robin Montgomery 6-3 6-3 in the first round. The two eighteen-year-old Americans are friends from juniors and were both happy for each other’s achievements. Gauff acknowledged that she had an accelerated path to the top of tennis, but emphasized that her route was unusual and she sees great things in Montgomery’s future. The world No.8 said, “us being the same age in different stages doesn’t mean anything. I think, essentially, people are going to peek at different times and I wouldn’t say that I’m peaking now, but I definitely think her peak is coming.”

Danielle Collins shared a similar sentiment to Gauff’s in her press conference after beating Martina Trevisan 6-2 6-4 in the second round. Speaking about her choice to play tennis in college before turning pro, the American said, “I don’t think I was mentally ready at 17 or 18 years old when I decided to go to college. I just wasn’t physically ready. I wasn’t mentally ready. I think there’s a lot of players that certainly are and they end up making really great careers for themselves.” The world No.19 added, “I feel like you make such an early commitment to being a professional and that means a lot. It’s a major commitment.”

Gauff might be fully committed to the sport, but her parents still take a great deal of the pressure off the young star. Gauff told media that despite her success, she is still on the family cell phone plan, uses their Netflix account, and her mom still pays for her hairdresser. One thing she does pay for is her brothers’ food delivery app, something their parents refuse to finance and she happily subsidizes and partakes in.

There was also some action among players who have been tour fixtures for some time. Donna Vekic notched her first win in over a decade against Karolina Pliskova 6-3 6-2 in the second round. The Croatian’s last and only victory in their eight previous matches came in the 2012 US Open Qualifying.

Vekic told media she did not remember much of that first match, but, “I do remember the three times I lost to her last year. I kind of had nightmares about that but now I’m super happy and super relieved.” The 26-year-old finally has the feeling that the hard work she puts in is paying off, telling media, “I started to believe in myself a little bit more, just really going for my shots.” Vekic will play the winner of Sloane Stephens and Aryna Sabalenka in the quarterfinals. 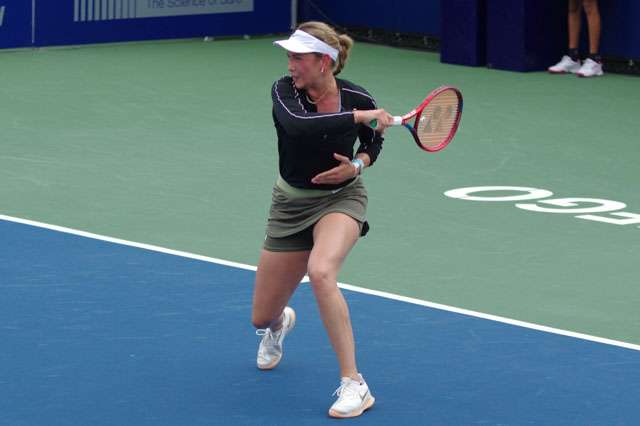 Jessica Pegula defeated local Coco Vandeweghe 6-3 6-1 in the second round. The fourth-seeded Pegula went in with a clear strategy that she executed well. The American explained later, “when I did get a chance to attack her serve I wanted to put a lot of pressure on her serve because I know when she gets really confident on that, it can be really difficult to break her.” This frustrated Vandeweghe, who at several times seemed tempted to smash her racket, starting the motion and pulling back before the carbon met the concrete. Pegula next faces the winner of Madison Keys versus Daria Kasatkina, a match she said she is likely to watch on TV.

Thursday in San Diego will be full of blockbuster matches with Iga Swiatek, Aryna Sabalenka, and Paula Badosa playing their first matches at the facility.